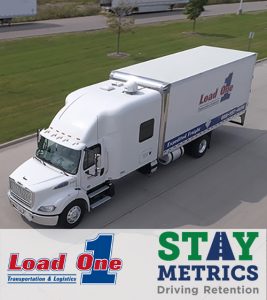 South Bend, IN. December 3, 2018 — Stay Metrics, the leading provider of evidence-based driver feedback, engagement, training, and retention solutions, announces a new case study on its partnership with Load One, LLC. The case study is the first in a new series about industry-leading motor carriers that have achieved breakthrough results for driver retention. This story is available to anyone at no cost on the Stay Metrics website.

Load One is one of the largest carriers in the expedite transportation market. In 2012, John Elliott, Chief Executive Officer of the Taylor, Mich.-based company, made a decision to invest in driver retention to sustain growth into the future.

“It just seemed like money better spent and more logical in the long run to retain what you have and grow that way versus constantly pushing to recruit what you don’t know,” Elliot said.

Load One began using the annual Driver Survey from Stay Metrics to gather driver feedback and opinions. It also focused on the experiences of newer drivers using the orientation survey, typically given after a week on the job, and the early driver experience survey, most often taken between 6-8 weeks after orientation.

The data-driven surveys led Load One to make numerous changes that ultimately resulted in a decrease of early-stage (first 90 days) turnover from 51.3 percent to 39.4 percent in the first year of the program.

“Showing the driver they have a voice and that a company listens is what drivers want.”

“In many instances, the reasons why drivers leave are based on simple misunderstandings,” Elliott said. “Our experiences show that drivers will open up to surveys administered by a neutral party. We have been able to identify problems early on and improve driver retention.  Showing the driver they have a voice and that a company listens is what drivers want.”

Load One also launched an online Gold Rewards program using an innovative platform from Stay Metrics that allows drivers to earn and redeem points from a myriad of categories that include job performance and tenure. The rewards website also serves as a hub for Load One to share company news and for drivers to access training resources.

Early driver turnover for Load One continued to improve, reaching 36.4 percent in the fifth year of the partnership. In 2017, Load One further improved the work experience of drivers with Drive First, a complete onboarding platform from Stay Metrics with digital employment forms, driver training modules, and assessments.

Between September 2016 and September 2018, the company’s trailing 12-month annual turnover dropped to 25.8 percent from 74.3 percent. In contrast, the average annualized turnover of large carriers reported by the American Trucking Associations increased to 98 percent in Q2 2018.

“Retaining drivers in the expedite market is an especially formidable challenge due to unpredictable schedules and other factors,” said Tim Hindes, Co-Founder and Chief Executive Officer of Stay Metrics. “We commend Load One for its ongoing commitment and success at delivering an industry-leading work experience for drivers.”

Stay Metrics is based at Innovation Park at the University of Notre Dame in South Bend, IN, and was recently named a “Best Place to Work in Michiana” by the South Bend Tribune.

Ensure you always know the latest news from Stay Metrics. Sign up to be notified of our press releases by filling out the form to the right.