Trucking as an indicator

Trucking has been considered a leading indicator of the economy for years. When I was a young dispatcher, my older brother, a Wall Street money manager, claimed he could count trucks on the George Washington Bridge as a gauge of the health of the economy and indicator of early trends.

I’ve worked in trucking all my life. I started as a fleet driver for a fleet owner, became an owner-operator, dispatched drivers for 10+ years, and then held senior level management positions for almost 20 years. Even after all this experience, the data I see as CEO of Stay Metrics is changing my longtime paradigm. If I’m right, we are going to be able to look at trucking as an indicator not just of early economic trends but also of overall labor trends.

The 20-year industry average of near 100% turnover is most often attributed to the trucking industry mistreating drivers. When I speak to friends and business leaders outside of trucking they can’t fathom why we can’t see what’s right in front of us …

I’ve seen this movie before

In the early 2000s, I spent a year out of the freight industry. As a licensed hobby auctioneer who loves doing farm and charity auctions, I decided to use my skills to sell real estate for a year.

I met an appraiser who shared our office whose common practice was to find the target appraisal price from the real estate agent that just referred him and deliver a number as close as possible to that target. Many realtors came into my office to see if I could help them sell an anxious owner’s property. In many instances, the auction price I could get them was significantly less than what they owed the bank. I failed to macro this out and see the forest.

If only I could have known that the signs I was seeing then would turn into the housing crisis of 2008. I was not alone, though, as no one noticed them at the time. I learned a great deal from this experience and have gotten better at reading the signs I see.

Driver turnover near 100% for the last 20 years

Turning back to transportation, truck drivers turn over at a higher rate than any other profession we are aware of. At the same time, the trucking industry has been facing a driver shortage for nearly two decades. I believe we are seeing a bit of a sociology experiment unfolding, which started with the federal regulation that created what we now call the CDL.

In the mid-1980s, I was there as a young dispatcher when this regulation came into being. I can still see the face of one of my drivers as he emotionally told me he doesn’t read well so he has to leave driving. There were many discussions about who can afford to go to CDL School for 6 weeks without a check and, on top of that, who has $8k to pay for that education. I remember thinking “what’s this going to do to the inflow?” And I do remember wondering if these situations were occurring all over the country.

Unlike in 2008, this time I do sense the shift coming, and with the tens of thousands of driver survey responses I have seen over the last seven years, I have a theory. 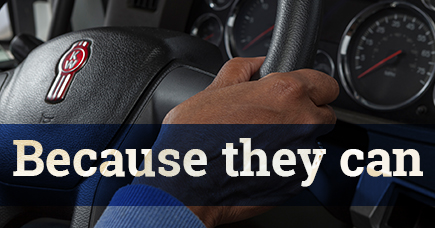 They can because for 20+ years they have conditioned themselves to move from one carrier to another with no fear. In fact, most drivers see moving as a way to improve their economic condition, sometimes the very same day.

The industry as a whole failed to see this and actually turned on drivers, demonizing those that did not sit still as disloyal. Marketing agencies carved out a niche of teaching carriers how to “sell to this market,” which has only heightened drivers’ skepticism.

Today, drivers are going into new companies with high levels of distrust. While the conditions that cause drivers to leave vary among carriers, the reason drivers leave because of them is the same. They simply don’t have to deal with these issues. They can walk into a new carrier that day.

Are other industries headed for 100% turnover? Is our ability to understand and manage a truly “at will” labor force where it needs to be.

Many managers struggle to overcome “old-school” training that instilled values like “you’re lucky to have a job” into them. I hear a lot of these leaders insist that drivers and younger workers are leaving because they “don’t want to work.” Might I argue, instead, that they want to work, they simply don’t want to work for you?

As I wrote earlier this year, your best bet to retain the talent you need to be successful is to build a culture drivers want to work in. The driver has to come first, arguably even ahead of your customers, because they have the control.

That’s not all bad though. If you can build a culture that respects and listens to drivers, you might just find that all those drivers who are leaving out there are leaving to come to you. A few of our clients are reporting just this kind of trend. It’s always the ones that are 100% committed to meeting drivers’ needs. They recognize drivers’ hard work. They do everything they can to improve the lives of drivers and their families.

Drivers certainly can leave carriers like this … but they won’t!