Think the driver shortage is bad now? Roll the film. It’s going to get worse

The truck driver population in the United States has held steady for the last 20 years, hovering between 3 million and 3.5 million drivers. But the trucking industry needs more, many more, to fill the driver shortage.

The number of truck driving jobs will grow by six percent per year through 2026, estimates the U.S. Department of Labor. The American Trucking Associations estimates the current driver shortage is 60,000 and predicts that over the next decade the industry will need to hire 89,000 new drivers every year, on average, to replace those who will be retiring and to keep pace with freight growth.

Based on national demographics and labor statistics, the driver shortage will only become more severe as Baby Boomers retire in droves and not enough younger workers step in and fill the gap.

Trucking has always competed with other blue-collar service industries for a limited supply of workers. Today, approximately 70 percent of high school graduates are enrolling in college which leaves only 30 percent who are considering the trades or military.

The trades were filled to capacity when I graduated from high school more than 30 years ago. Blue-collar jobs were more attractive, especially in trucking where a person could see a long career ahead.

Today, young workers who may be thinking of a career in trucking see an industry that is ripe for disruption from autonomous technology. Even if the autonomous revolution does not happen for another 10 or 20 years, it certainly will influence career choices going forward. 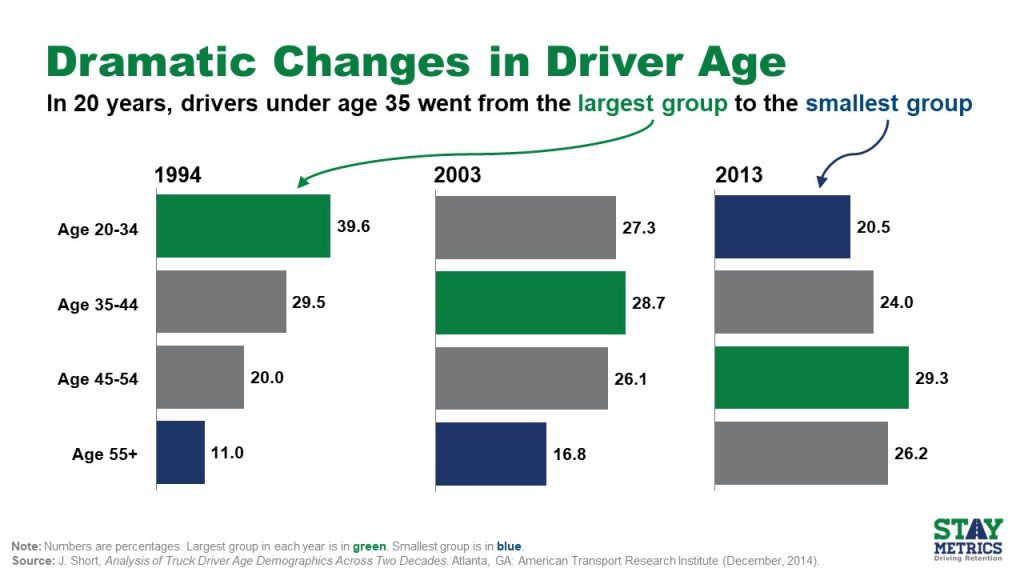 Driver demographics already were moving in the wrong direction before disruption appeared on the horizon. Between 1994 and 2013, drivers under the age of 35 were the largest segment of the workforce. Today they are the smallest. Our research data shows the average age of drivers is 45.6.

Truck drivers, old and young, will become a rare breed until wages compensate for the difference in quality of life from other trades. I believe driving jobs will have to pay 25 to 30 percent more than other trades to shift the balance.

Although driver wages have gone up significantly this year, the recruiting pipeline has continued to shrink. This may well be the new normal if the nation’s immigration policies do not start working in favor of the trucking industry.

Our research suggests that motor carriers are already tapping immigrant labor, but they could use more. Data from the in-depth annual Driver Survey we conduct for motor carrier clients show drivers who speak a second language — which appear to be first-generation immigrants — are on the rise.

One question we ask is “do you speak a second language fluently?” Between 2014 and 2018, the percentage who answered “yes” climbed from 21 percent to 26 percent of our clients’ driver populations.  Notably, Russian-speaking drivers went from 2 percent to 7 percent in that timeframe.

Because the recruiting pipeline for drivers will get tighter, the best and perhaps only chance motor carriers have to grow and outperform their peers in the industry is with driver retention. Stay Metrics’ clients are consistently outperforming the industry in retention. 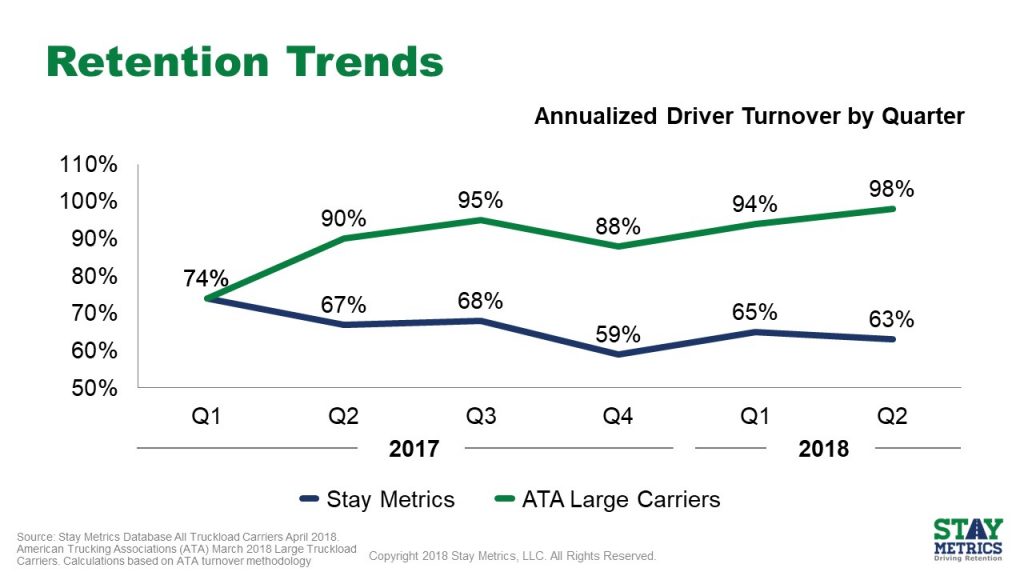 The ATA recently reported the driver turnover rate at large truckload carriers climbed 4 percentage points in the second quarter of 2018 to an annualized rate of 98 percent. Based on the same formula ATA uses to calculate turnover, the rate of Stay Metrics clients during the same period was 63 percent.

For more information about how our evidence-based driver feedback, rewards, engagement, and training solutions increase retention, please give us a call at 1.855.867.3533 or send us a message through https://www.staymetrics.com/contact/